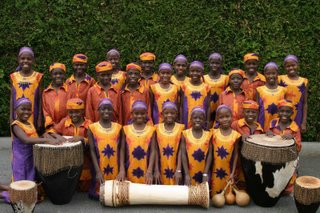 This Choir began their tour in May of 2004 in Seattle, WA and is comprised of 24 children from Uganda. Their tour leader is Abraham Kiyingi, a choir child from the third African Children's Choir. Abraham has a degree in computer software management and chaperones with another fellow choir member from the fourth choir; Edith, who travels as their choir conductor. Both are giving their time to next generation of African children!The Choir has completed the west coast portion of their tour and is now traveling across Canada. They performed at an open air concert at the NAMM conference with the John Lennon Tour Bus. At the National Religious Broadcasters convention, the children sang with Christian Artist, Rebecca Saint James. They also joined celebrity ranks as they sang with Wyclef Jean on The Late Late Show and The Tonight Show with Jay Leno, singing the title song to the movie, Hotel Rwanda.

To see when they are coming to your hometown go to www.africanchildrenschoir.com